How referrals and word of mouth can help your SaaS grow? (2022)

We discuss how you can apply referrals and word-of-mouth marketing for your SaaS with insights and examples from growth marketing experts and SaaS founders. 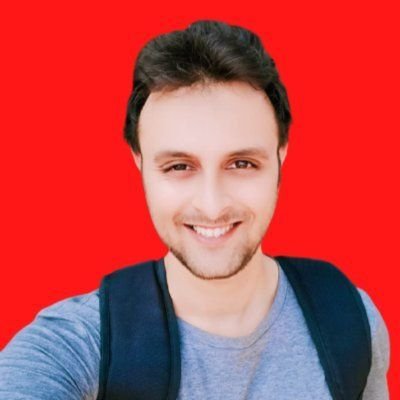 Ricky is the founder of SaaSwrites. A SaaS founder himself, Ricky found it difficult to grow and market his product after building it. When he arrived on Twitter, he realized there was a lot of great information but not organized in a way that can truly help SaaS founders and makers. He started SaaSwrites as a curation of all the best marketing and growth resources to help other founders with their SaaS growth. Ricky runs two SaaS products - Beejek (a digital receipt platform for retail stores) and IntroSend (a community engagement tool for businesses and community managers). Say hi to Ricky @rickywrites on Twitter. 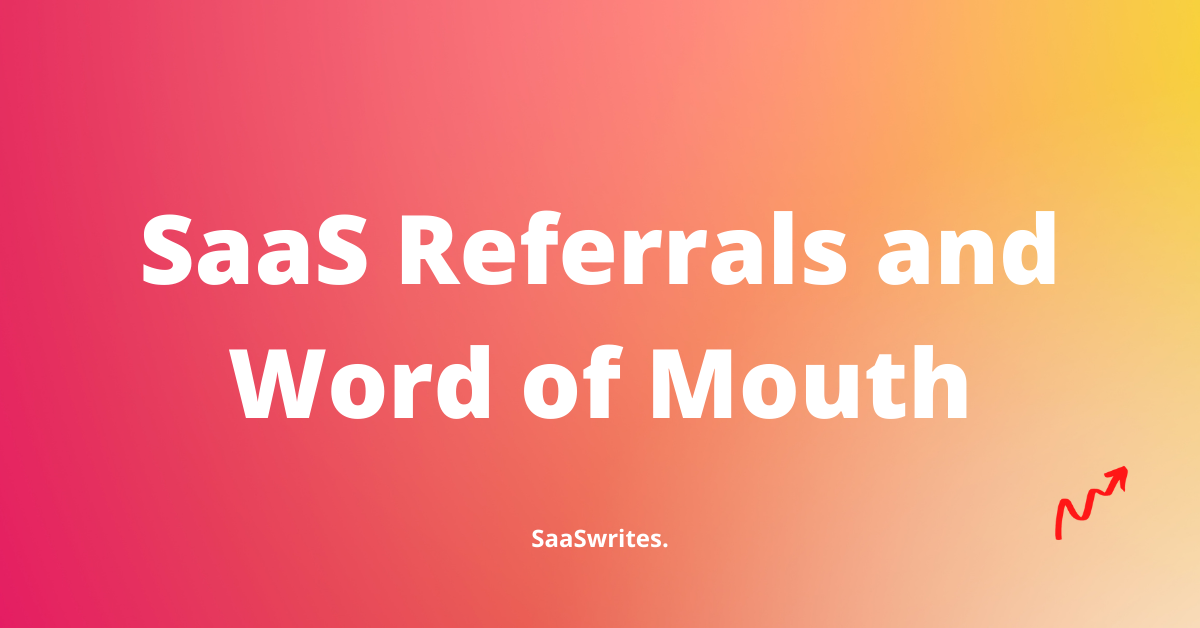 💡
Note: SaaSwrites is a curated growth marketing hub and resource built to help SaaS founders grow their products. We sincerely thank all our experts for their constant value addition to this world.
Updated on: 04/04/2022

Growth Tactics on how to grow your startup through referrals, and word of mouth.
Your startup most likely won't make a video and go viral like Dollar Shave Club. So instead of trying to "go viral," focus on acquiring customers through fans who already love your product.
💡
Read:
📈
What is Growth Marketing for your SaaS?
There are 3 ways to grow through your current customers:

It's powerful: You don't have to artificially incentivize users to refer—you simply empower them & get out of their way. E.g. To pay someone with PayPal, the payment recipient needs to first join PayPal—they're incentivized to sign up to receive their cash.
Product-led growth is possible when ppl use your app to:
If your product doesn't fall into one of the 2 categories (used to transact/collaborate or used to create content intended to be shared), product-led growth might not be the main way you grow your startup. But that's okay. You can lean into word of mouth or referrals.

It's a measure of how good your product experience is. E.g. the product is so good that users proactively recommend it to others. Every company should earnestly pursue WOM. An incredible product makes every part of growth easier.
WOM is the result of a product that:
Some companies that get WOM right don't even need to spend on advertising—people can't stop talking about their product.
💡
Read:
📈
How to acquire your early-stage SaaS customers? (2022)
Your potential for WOM success is also a function of how big you and your market are: If you only sell to 10 people/month, you are unlikely to see runaway WOM—not enough kindling for the fire.
Tip: Consider testing ads to get an initial user base to fuel the WOM fire.

Transactionally incentivizing users e.g. "refer a friend and get $50 off". The key is knowing:
Most users don't care about earning a bit of cash. Instead of cash, try rewarding users with more access to the CORE PRODUCT. E.g. when you invite someone to Dropbox, you're rewarded with extra storage.
Storage is what people signed up for—give them more of it. If you can't reward with more access to your core product, then the cash reward must be SIGNIFICANT:
💡
Read:
📈
How customer retention can avoid churn for your SaaS?
3 metrics to focus on for referrals:

So optimize your onboarding.
💡
Read:
📈
How to onboard your early-stage SaaS customers (2022)
Build an amazing product that:
Then accelerate WOM through a low-friction and enticing referral program.

The OG referral program. When PayPal was starting out, they gave money away to new users and referred users. It worked so well they had to reduce the amount of money they gave away. At, first PayPal gave you $20 for signing up. And $20 to anyone you referred.
They then dropped it to $10. Still, very successful, but they dropped it down to $5. According to @elonmusk , PayPal spent roughly $60m on their referral incentives. For PayPal, the daily growth rate was 7 - 10%. Plus, the user base surpassed 100m users.
💡
Read:
📈
How to use A/B test to skyrocket your SaaS CTR
Musk compared it to bacteria in a Petri dish. Your referral program needs to expand quickly, and it has to happen fast. Free money makes that happen.

Again, ‘The Techno-king of Tesla’ aka @elonmusk in the referral musk. They gave away money at PayPal…why not Tesla too? Tesla gave away $1000 per successful referral, access to exclusive events, and a “founder series” Model X.
Here’s what Tesla did:
Plus, Tesla fans aren’t just any fans — they’re raving fans who are obsessed with Tesla’s every move. So, Tesla incentivized them:

DropBox followed in the footsteps of PayPal. They also created a 2-sided referral program. Here’s how it went:
Do this until you reach 16 GB in free storage. The key was both parties winning. The results speak for themselves:

Getting paid to travel? Imagine that. Airbnb made it happen. They launched V 1.0 of their referral program in 2011. How it worked:
After seeing the success, they scratched V 1.0 and launched V 2.0. Version 2.0 focused on distribution and driving awareness to their referral program. They added things like:
The referral incentives remained the same. And the results are mad: Referrals drove 900% year-on-year growth for 1st-time bookings.

Amazon Prime had an epic referral program. A survey showed that Prime Members:
Refer a friend, and when they make a purchase over $5, you’ll get $5 to spend on Amazon. It’s genius. You get $ that you’ll eventually spend using Amazon. You know that Espresso Floating Side Table you’ve been eyeing for weeks? Refer enough friends, and it's all yours.
IMO: It could’ve been better if it was 2-sided. Ex: Friend also receives $5 for spending more than $5.

Of course, why would the most visited site in the world not have a referral program? A badass one at that. Their goal was to drive users to their Google Apps. So, Google created 3 easy to navigate panels to tell you how to partake.
Here’s how it worked:
Plus, a few days later, you’d receive an additional 20% off for the first year of Google Apps.

Refinable, a marketplace for NFTs created a referral program that incentives users to refer friends to unlock NFTs. The more friends you refer, the rarer the NFT. And the rarer the NFT, the less there is of it - creating a sense of urgency.
💡
Read:

8. The Room Where It Happens

@SahilBloom and @gregisenberg. Last month, Sahil and Greg launched their exclusive community called "The Room Where It Happens."
Want to join? Refer 3 friends and access is all yours. Epic use of a referral program for a launch.

Parade customers can give a free pair of underwear with their unique referral code. This got new individuals to seamlessly use Parade's products quickly. According to Morning Brew, "Nearly 10% of Parade customers refer a friend within a month of making a purchase."

Before launching, Italic had a 20,000 person waitlist eager to gain access. And the only way to climb the waitlist was to refer friends. The more friends you referred, the more you skipped the line.

In 2016, T-Mobile launched their T-Mobile "Stock" Rewards program. For every person, you referred to T-Mobile, and they signed up for a line, you gained one share. Not only was it effective, but it was a great PR stunt. And you could earn up to 100 shares.

Harry's collected over 60k+ referrals in one week. Harry's gamified their referral program with product milestones. And every reward got product into the hands of customers through a friction-free referral process.

Ricky is the founder of SaaSwrites. A SaaS founder himself, Ricky found it difficult to grow and market his product after building it. When he arrived on Twitter, he realized there was a lot of great information but not organized in a way that can truly help SaaS founders and makers. He started SaaSwrites as a curation of all the best marketing and growth resources to help other founders with their SaaS growth. Ricky runs two SaaS products - Beejek (a digital receipt platform for retail stores) and IntroSend (a community engagement tool for businesses and community managers). Say hi to Ricky @rickywrites on Twitter. 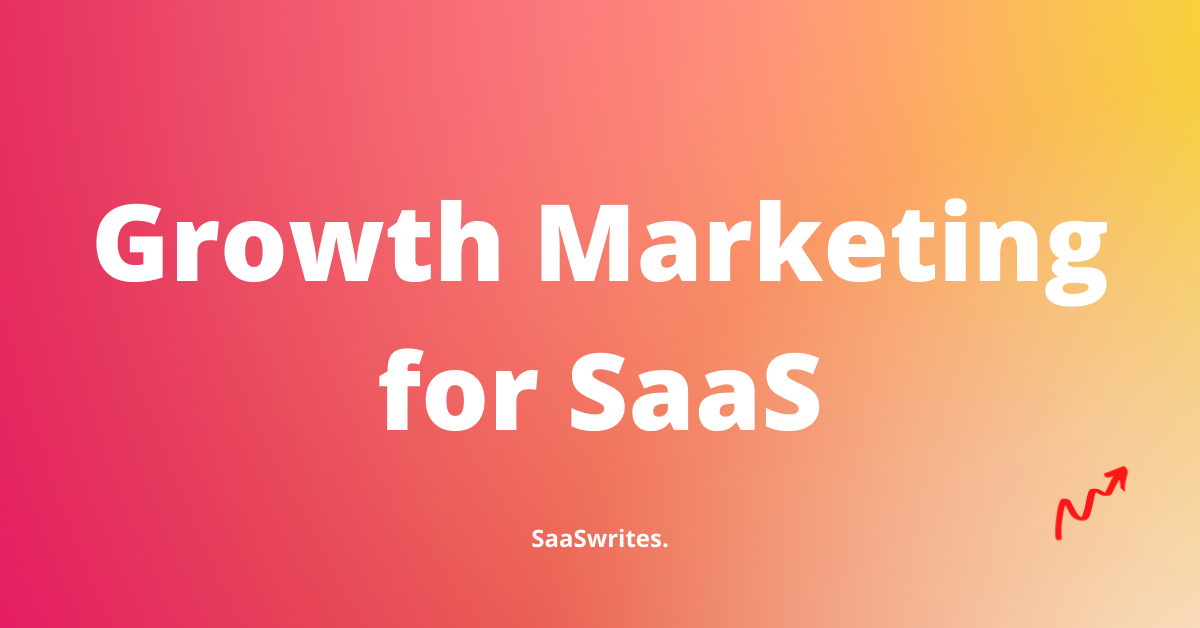 What is Growth Marketing for your SaaS? 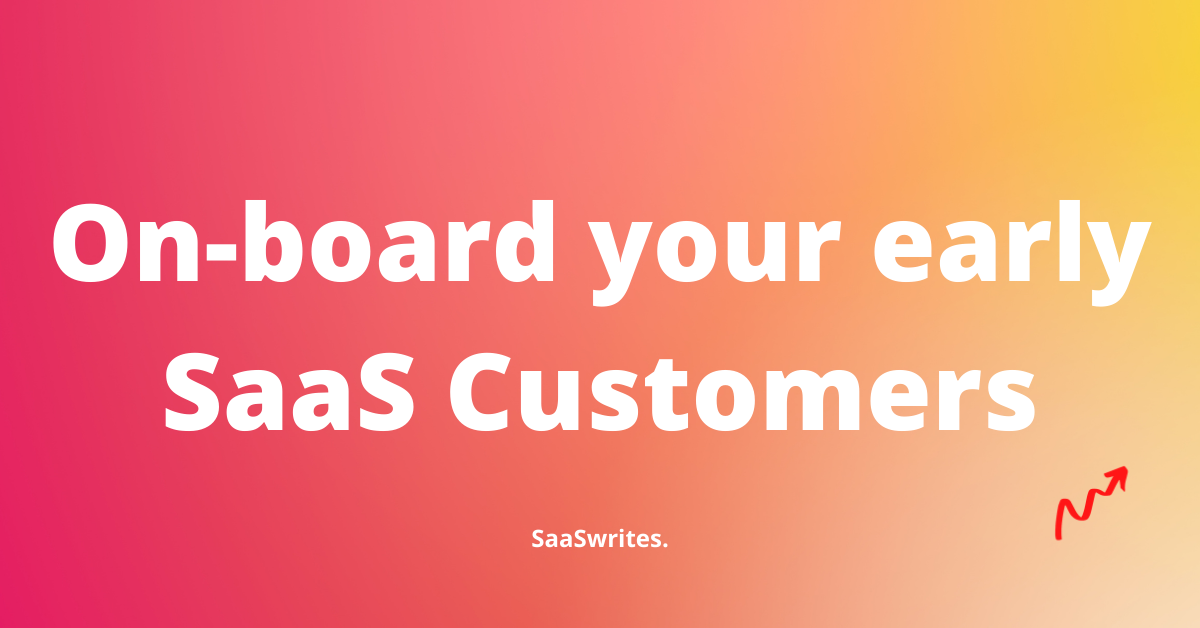 How to onboard your early-stage SaaS customers (2022) 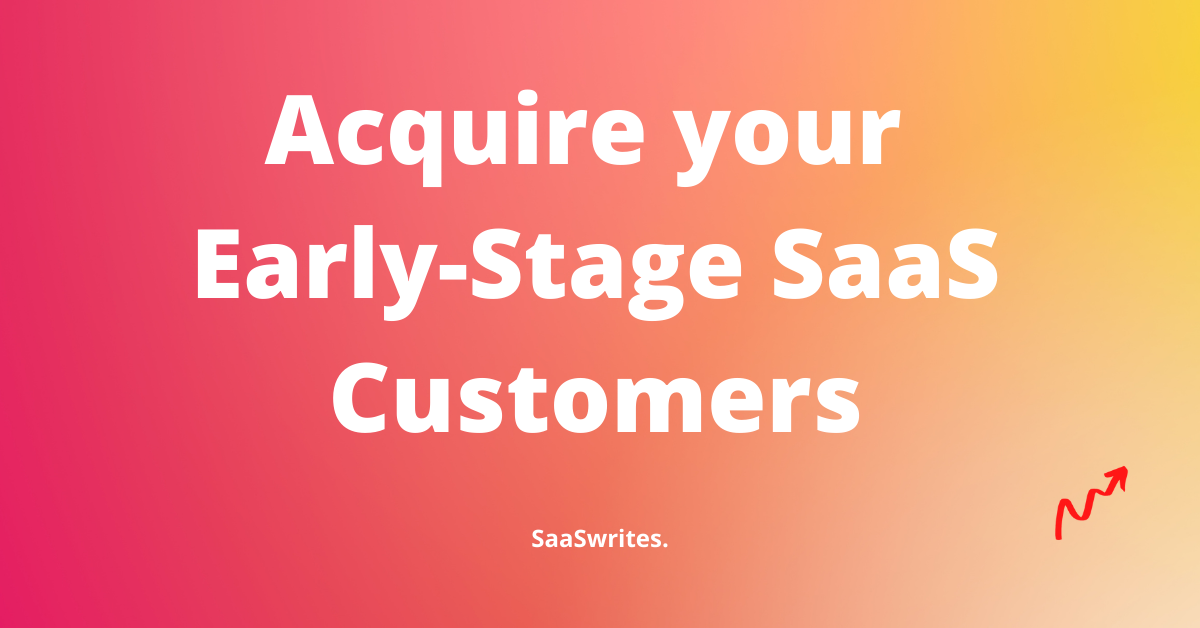 How to acquire your early-stage SaaS customers? (2022) 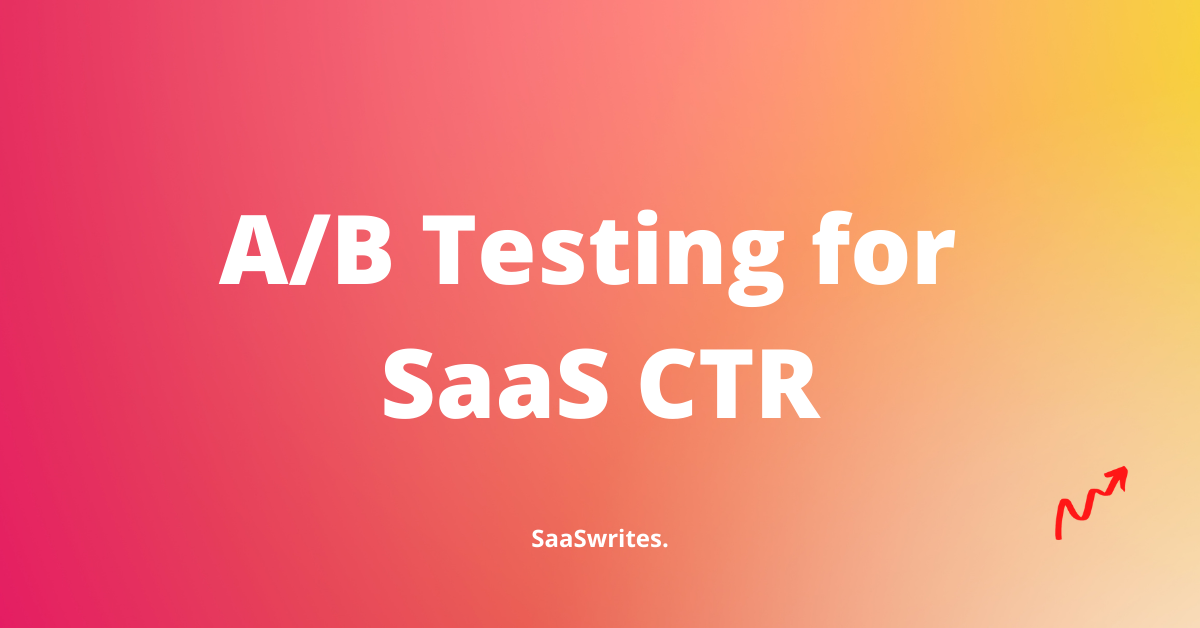 How to use A/B test to skyrocket your SaaS CTR 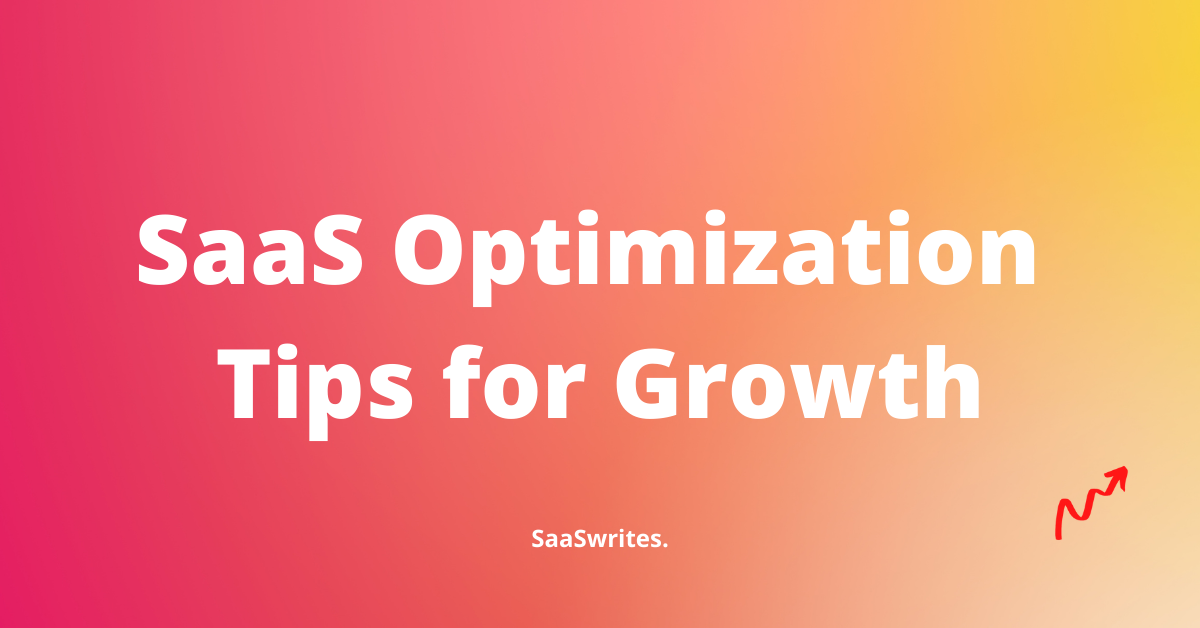 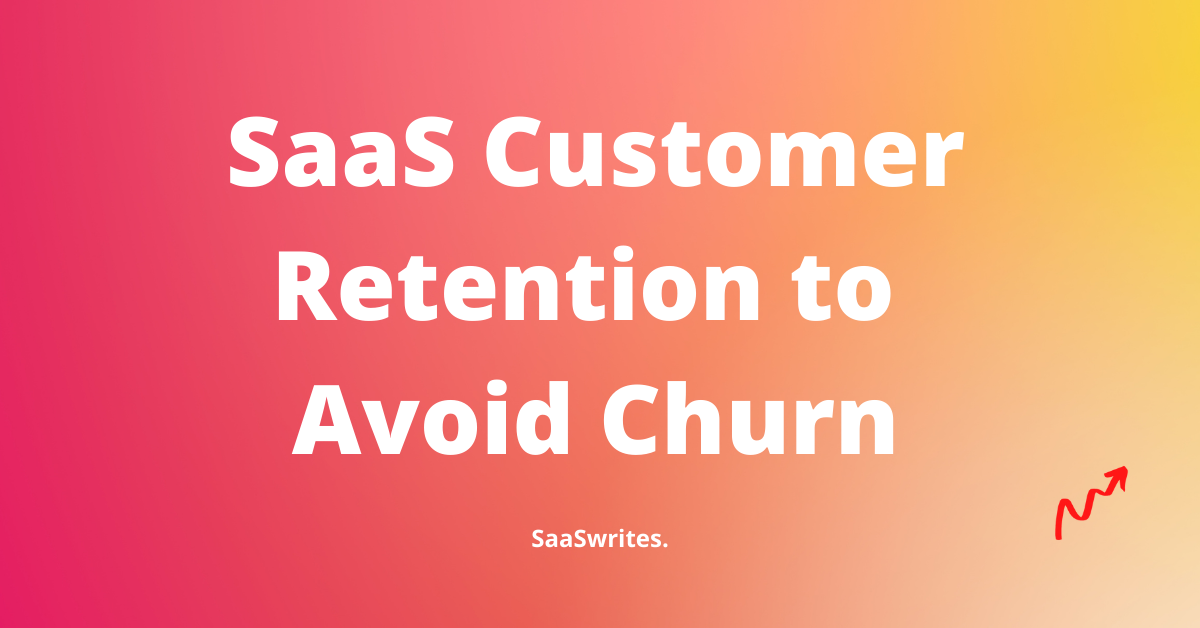 How customer retention can avoid churn for your SaaS?